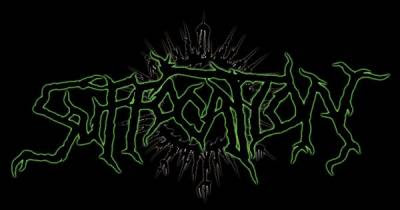 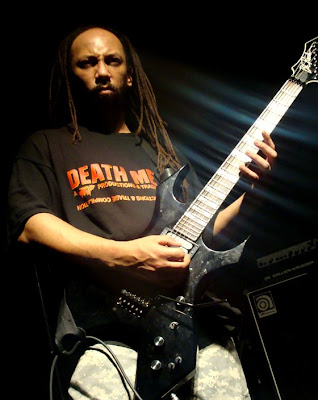 I'm VERY proud to announce the NEWEST interview for Underground Noise with Terrance Hobbs (lead guitar) of Suffocation. Terrance is one of the best in death metal music, and I'm happy that he had the time to answer my questions. So if you're up for reading, enjoy this.


UN: Pinnacle of Bedlam is the latest release by Suffocation, is it what you feel is your best release? Why or why not?

TH: Well I always feel we can achieve a better everything but really I'm very proud of this record & a lot of time went into making it.and as the years pass by we learn more in the recording process.so our next LP should be even better then this latest 1.. at least I hope it will. lol

UN: Who are some of your major influences?

TH: I have a lot of influences from older Metallica, Slayer & Exodus to more heavier stuff like Morbid Angel Pestilence & Terrorizer; to newer stuff Decrepit Birth, Aeon, Behemoth & The Black Dahlia Murder As far as guitar I have always loved Randy Rhoads, Yngwie Malmsteen,Blackmoor, Mcalpine & Joe Satriani, so really my music tastes and influences span a lot of different styles of players and music!! By the way there are soooo many more to comment on it would take about 3 years to tell you all of em.

UN: Do you feel that the death metal scene is stronger nowadays? Why or why not?

TH: Well I do think people are more aware of it now then they were before, but really I think the economy has hurt just more then just death and black metal sales and gigs...but for the most part I think its just as strong if not stronger due to the internet and the and the fact everyone can see and hear agressive music and the click of a mouse or phone!!

UN: Is there any place in the world you've always wanted to tour?

TH: Africa & China, we have never been there so those places are on my hit list for sure!!

UN: Have you ever had any embarrassing moments while onstage?

TH: Tons! I've been so drunk I threw up on stage lol, completely blacking out on my own songs live causing a train wreck for the band in front of tons of people...talk about embarrasing!!

UN:What was the first instrument you played?

TH: In elementary school I started playing a stand up bass at 7 got my 1st acoustic at the same age..but really I didn't take playing seriously until I reached 13... the stand up bass went out the window when I got my 1st real electric guitar, an Ibanez!!!

UN: Have you had any other professions besides music?

TH: Well I've been a jack of all trades really but for the most part I was a soda and fountain machine installer!!! Hence the word soda jerk lol!!!

UN: How do you feel about bands that aren't well known?

TH: Well all I could say is stick to your guns and go out and play as much as possible..that way people will hear your work and build a fan base...then they won't be so unknown!!

UN: How does the chemistry of Suffocation influence you?

TH: Well, it's great to have really good people to work with, the vibe in the band nowadays is really really good, and all that can do is help the band do what it does better then before.. we actually have a good time together and that really helps the creative juices flow better...

UN: Where has been your favorite place that you've played LIVE?

TH: That's a tough question because there are so many killer places on the globe I couldn't single out 1 end all be all gig that was better then all the others...but there are a few  like Montreal Canada, Sao Paulo Brazil, Jakarta Indonesia...those 3 places when we played were really super sick!!!

UN:What is the next step for Suffocation? I heard Frank is taking some time off.

TH: Yeah ya know Frank's a old fart lol, but on the more serious note frank has a full time job and cant tour as much, but nonetheless he's still our singer, so we work around his schedule as much as possible and get a fill in when necessary which in turn give me the chance to work with different musicians and keep it interesting after 20 something years!!

TH: Thanks for checking us out Underground Noise and Suffocation will be on the road soon. Come check us out  and support the underground!!!!!
Posted by EVILVENGEANCE666420 at 10:25 PM No comments: 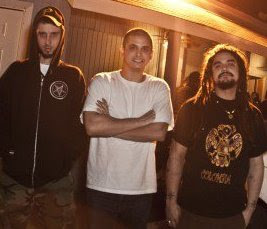 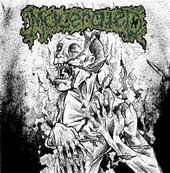 If you can't headbang to the opening riffs in this 4 song DEMO, then there is something seriously wrong with you!!! Macerated, a 3 piece Death Metal/ Goregrind fan's dream come true. The vocals are very similar to Lust of Decay for the growls and the screams are like Serial Butcher & Origin, guitars are like Ingested & drums which will beat you to a pulp just like Deeds of Flesh. For being a DEMO, this band really has what it takes to show the listener just what they are capable of doing, and yes...they do it very damn well. Filled with brutal riffing, & extirpating most bands you've loved for years to come. The songs Beefsteak Bayonet & Turtlehead Buttplug are the ones I like best off of the DEMO. Perhaps you might feel the same way, but only one can tell what they like and don't like. So if you are looking for something to satisfy your hunger for extreme metal, then look no further, Macerated will crush you to pieces. With all that said, I give this DEMO a 5/5 stars based on their musicianship and originality and how they are a kick ass band. So metalheads, KEEP IT REAL!! KEEP IT METAL!! KEEP THE UNDERGROUND ALIVE!! ALWAYS KEEP THOSE HORNS UP!!! \m/-_-\m/ EVILVENGEANCE666

Be sure to check them out on Facebook, they definitely could use some more support from NEW fans!! 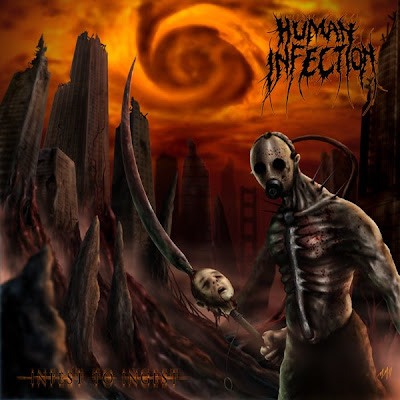 Take technical guitar sweep patterns like Origin, hammering drums like Dying Fetus, killer guttural vocals like early Frank Mullen from Suffocation, bass tones like Fleshgod Apocalypse & throw them all in a blender; you end up with Virginia natives Human Infection. This band is very explosive, packs the punches & out for blood. Mind blowing? (chuckles) HELL YEAH THEY ARE! Human Infection's music is tight, lyrics are brilliant & the cover art is indescribable. Human Infection is designed to be brutal, sick, demented & will keep you spinning. They're guaranteed to make ANY Death Metal listener a FAN instantly. It goes to show that Human Infection is capable of spreading its plague around the universe. If you're reading this & haven't been listening to Death Metal for very long, be advised these bad ass dudes will affect you! GET this album in your collection immediately in case you haven't, SLACKERS! LOL, Just kidding, but on a serious note...GET IT! Personally speaking, my favorite song on the album is Creations Obscured. These guys are on a major level of high intensity and ready to show you who the boss is. If you're ready for them to throw down, you better back it up and shred your brains out to this amazing and kick ass band. So, I rate these guys with 5/5 stars based on EVERYTHING they do and will continue to do as long as they can and want. With all of this said, KEEP IT REAL, KEEP METAL ALIVE, KEEP THE UNDERGROUND ALIVE & KEEP THOSE HORNS UP METALHEADS!!!! \m/-_-\m/ EVILVENGEANCE666