DEMONS WITHIN- SHROUD OF DECEPTION AND SELF TITLED DEMOS 2 IN 1 REVIEW!! 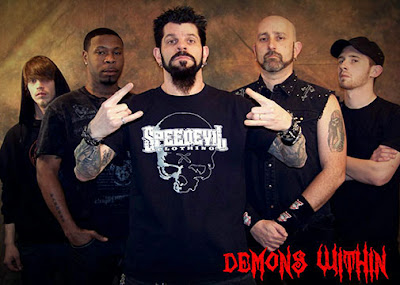 Here comes a malevolent onslaught 5 piece band known as Demons Within hailing from Ohio. Filled with groove sounding Death Metal riffs and beats that will excel to a higher level of intensity and reach numerous extreme music fans around the world. Vocals that are exceptionally barbaric guttural growls and brutal screams which are surpassing most vocalists nowadays. Both of these Demos are utterly striking with each song represented in each. Having shared the same stage as United By Hate, this band is on the prowl and ready to attack its prey. Both demos are a bit different sounding with the production, but I have to give this band a lot of credit for how talented they are. With a crushing blow to the head, the self titled Demo receives a 5/5 stars because of the song Heaven Shall Burn which I feel is the most fierce one on the demo. However the Demo entitled Shroud of Deception gets a 4.5/5 stars only because I didn't find the production quality to be as bad ass as the first one mentioned, but this band is stellar in its style and will continue to do so and  be one that should be in any metal fans collection. So if you like bands like United By Hate, Lamb of God & Cannibal Corpse (with Chris Barnes), to name a few, then give the band Demons Within an ear so you can hear and listen to what they're all about. Trust me, you won't be unsatisfied. So metalheads, until next time...this is EVILVENGEANCE666 saying KEEP SUPPORTING UNDERGROUND METAL, UNDERGROUND NOISE AND KEEP YOUR HORNS UP!!! \m/-_-\m/

Member Lineup on Self Titled Demo:

Track Listing on Self Titled Demo:

As Darkness Reigns
Heaven Shall Burn
Kingdom of Dust 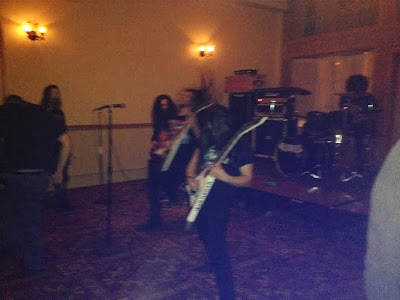 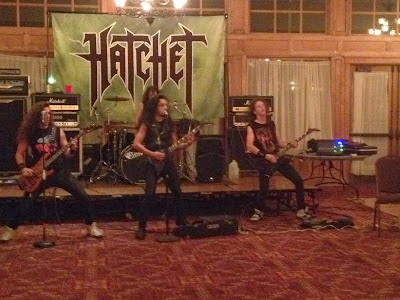 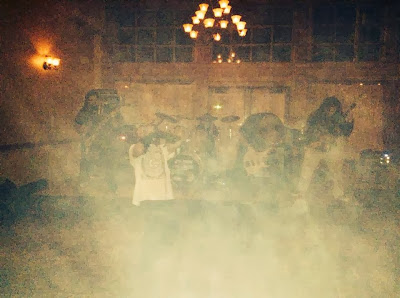 This entry was meant to be written a month ago, but felt I'd wait it out until now and tell all of you about this awesome show that went down one night here in Las Vegas New Mexico. Both Exmortus & Hatchet hailing from California threw down some killer sounding Thrash & Heavy Metal that night that just tore it up in a small crowd that made it feel like thousands were there. Local Black/Death Metal band Daemonius was there to support and open up the show along with showing what they've got with a couple of new songs which are very amazing indeed. A few instances with both Exmortus & Hatchet was the intricate and technical solos that each of the guitarists had played and talk about INCREDIBLE & STUNNING SKILLS!!! This one for instance with Exmortus was when Conan & David did back to back guitar playing opposite guitars doing magnificent solos which was once a Van Halen move, but it just impressed this town so much that we wanted more! All of these bands deserve recognition and major props for their kick ass devotion for Underground Metal and their terrific attitudes which makes them definitely fun dudes to party with after a show, during a show and before the show as well. This show is one that is clearly one that won't ever be forgotten and is remarkably one of the best I've ever witnessed to appreciate for the value of how much fun it was for sure. If it wasn't for Clarisse, my girlfriend for putting on the show, then we wouldn't have had a show. I'm so glad it happened and all of these bands and her as well deserve the utmost respect and hails because of bringing METAL to a whole new level, so BRING MORE!!!! Also might I add, it was cool to chill with both bands Exmortus & Hatchet on my lunch break at work and after the show as well. Anyhow my metalhead friends across the globe, send me some feedback. Let me know if there are any bands you are looking for me to review or interview. This is EVILVENGEANCE666 saying, later!!!!!
Posted by EVILVENGEANCE666420 at 4:26 PM No comments: