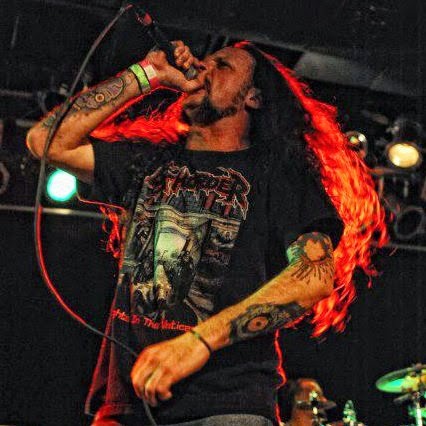 IT'S TIME FOR A NEW INTERVIEW LADIES & GERMS!!! TRUST ME, THIS IS PRETTY INTENSE. I got in touch with Bret Hoffmann of Malevolent Creation to answer my questions, so if you're in good spirits, sit back and enjoy!! BECAUSE IF THIS DOESN'T GO VIRAL...I DON'T KNOW WHAT THE FUCK WILL!! LOL, but seriously folks...this is awesome!! \m/-_-\m/

UN: Who are your influences both musically and personally?

BH: Musically, quite a lot. Old KISS, Judas Priest, Iron Maiden, Saxon, Zeppelin, Slayer... LOL the list goes on and on!! Personally, I have to say my Grandmother. She's actually always told me to keep playing music and tour. She says "You know you won't really be happy if you stop playing music" And who am I to argue with my Grandmother HAHA!!

UN: Where has been your favorite place or places to perform LIVE?

BH: That's a VERY tough to answer. I really enjoy playing everywhere, except MANY places in the States. The fans in the States are cool; it's the venue owners and many promoters who are scumbag pieces of shit! BUT I do have some friends who are great promoters in the States. I do really love playing in Germany. It kinda feels like a second home to me. Been touring Europe for 25 years. BUT like I said I just really enjoy traveling and playing music all over the world!!

UN: What song by MC is your favorite that you guys have written?

BH: HAHA yeah right. We got over a hundred songs . Definitely can't answer that. I might as well throw a dart HAHAHA!!

UN: What is the next step for Malevolent Creation?

BH: We are working on a new album, we have a new manager, we have a bunch of really good record deal offers on the table, and tour offers keep coming. So we're getting ready to gear it up higher and get this shit rolling! Hitting Europe to play some great fests in August. Really excited!!!

UN: How did the name Malevolent Creation come about?

BH: I used to watch Transformers cartoon back in the mid 80's. They did like a little info demo on the Decepticons and referred to them as a "Malevolent breed of robot warriors" and Megatron/Galvatron was actually pretty fucking twisted for a kid's cartoon. Really dug his evil psychotic rage!! I liked that word and wrote the song Malevolent Creation,which has nothing to do with the Transformers, I did however write a different song about Galvatron(Sacrificial Annihilation) . The name of the song just worked good for the name of the band too.


UN: Have there ever been any moments while on any tour that may have been life threatening?

BH: Oh sure. I have had some very hairy airplane experiences!! Some corrupt governmental shenanigans in Indonesia HAHAHA ( I had some serious doubts I was ever gonna see home again) LOL!!! And I'm sure some moments that I wasn't even aware of.

BH: Just want to thank all and any fans that we have who still enjoy our music!! Thanx Thanx Thanx!!!!! We should have a large scale tour going down within this year and I look forward to busting our ass out on the road for you guys!!! And thank you Alex for your support of this scene and music!! Keep rollin' brotha!!
Posted by EVILVENGEANCE666420 at 7:13 PM 1 comment:

Okay, so check it out metal heads!! There are some new things happening with Underground Noise coming really soon, so keep your eyes peeled and tuned to this site when they arrive.

UNDERGROUND NOISE HAS BEEN ON A BREAK

I have been on a 4 month break due to some unfortunate circumstances that came my way, but after those months passed I took this break to figure out what I really want to do and that is to create music of my own, continue the reviews and interviews here on Underground Noise & keep you all updated on NEW bands that are in the metal genre of music. Some of you probably wondered what happened, but I'm NOT going into details. However, this is not the end. This is the dawn of a new beginning and the BEST is YET to come!! Thank you to the bands who I've had the honor and privilege of interviewing and reviewing including your demos & full lengths. THANK YOU TO THE FANS WHO LOVE & SUPPORT METAL MUSIC!!! \m/-_-\m/ EVILVENGEANCE666