TORN THE FUCK APART- ...THE DISSECTION OF CHRIST (ALBUM REVIEW) 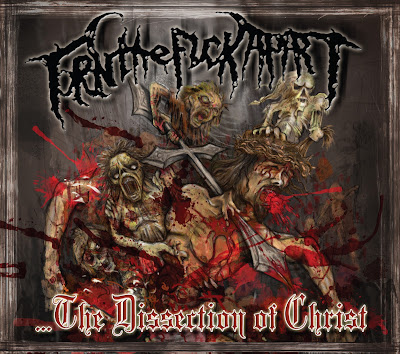 From their previous release "Gods of Gore," TTFA have majorly matured their sound in a very drastic way. Fans and listeners would have to agree about this album destroys Gods of Gore. Blazing guitars like Origin & Brain Drill in spots. TTFA blasts from Kansas. Jake is an amazing drummer and a friend of mine. This is a fine album. In some parts of this album, I have to agree with some who said it's hard to say who they sound like..but they do a damn good job. Pounding breakdowns that will shred your innards into meat.  The songs I find to be the most catchy are  Dead Religion & God's Blood Turned Black. However, this album is intensely great in its own merit. For being a band I have known about since I met Jake back when I lived in Kansas helps out a lot, I give the album a 5/5 stars based on originality and very awesome guys who have also shared the stage with a band known as Monstrosity back in 2009 which was awesome. So if you want a band that reminds you of early death metal with a new twist on it, then this band is up your alley. Until next time metalheads, keep it EXTREME AND KEEP YOUR HORNS UP!! \m/-_\m/ EVILVENGEANCE666 I'm pretty damn sure that a lot of you metalheads are devastated at the news that a lot of us received on the passing of Jeff Hanneman (guitars) of Slayer. Jeff was one awesome guitarist and his legend lives on in the music he helped create and help form Slayer as one of the most well known Thrash Metal bands in the world. I can only imagine how Kerry King feels about losing a lifelong friend and band member. To me it was unexpected to hear about how he passed away. Sometimes unfortunate things happen and time can't be taken for granted in any situation, but I wish for the sake of his band and family that they continue to move forward with whatever they are doing and things will just fall back into place when they can. However, R.I.P. Jeff Hanneman, you'll be missed.
EVILVENGEANCE666 \m/-_-\m/
Posted by EVILVENGEANCE666420 at 7:09 PM No comments: